Oceania is the first ever major survey of Oceanic art to be held in the UK and is pioneering in its scope and understanding of the individual and collective identity of the Pacific. This epic exhibition marks the 250th anniversary of both the Royal Academy and Captain James Cook’s first expedition to the Pacific on the Endeavour and celebrates the art of Melansia, Micronesia and Polynesia; encompassing the vast region from New Guinea to Easter Island, Hawaii to New Zealand. It is a rare opportunity to be immersed in the art and culture of an area that represents nearly a third of the world’s surface, a region rich in history, ritual and ceremony.

Opening the exhibition is Kiko Moana; a 36ft long woven wave of dazzling blue tarpaulin by the Mata Aho Collective, a group of four Maori women artists who come together to share ideas and develop work not in isolation (a fitting way to open an exhibition based on the flow of ideas not just between the West and the Pacific but within the vast area of the Pacific itself). Kiko Moana is dramatically suspended from the ceiling of the central hall of Burlington House where it comes “splashing” to the ground. Inspired by traditional Polynesian textile art, the tarpaulin artwork comments on the complexity of Māori lives while evoking the surface of the sea.  The material has also been folded, stitched and slashed to symbolise how, on the one hand, water is a source of exploration, freedom, development and connection but, on the other, it is a source of danger and pollution. In this globalised era when climate change threatens the very existence of many of these island nations. Kiko Moana is just one contemporary artwork exhibited in Oceania that reveals the narratives that shape this area by acknowledging the challenges and opportunities that have been encountered in the past and present and will be encountered in the future. 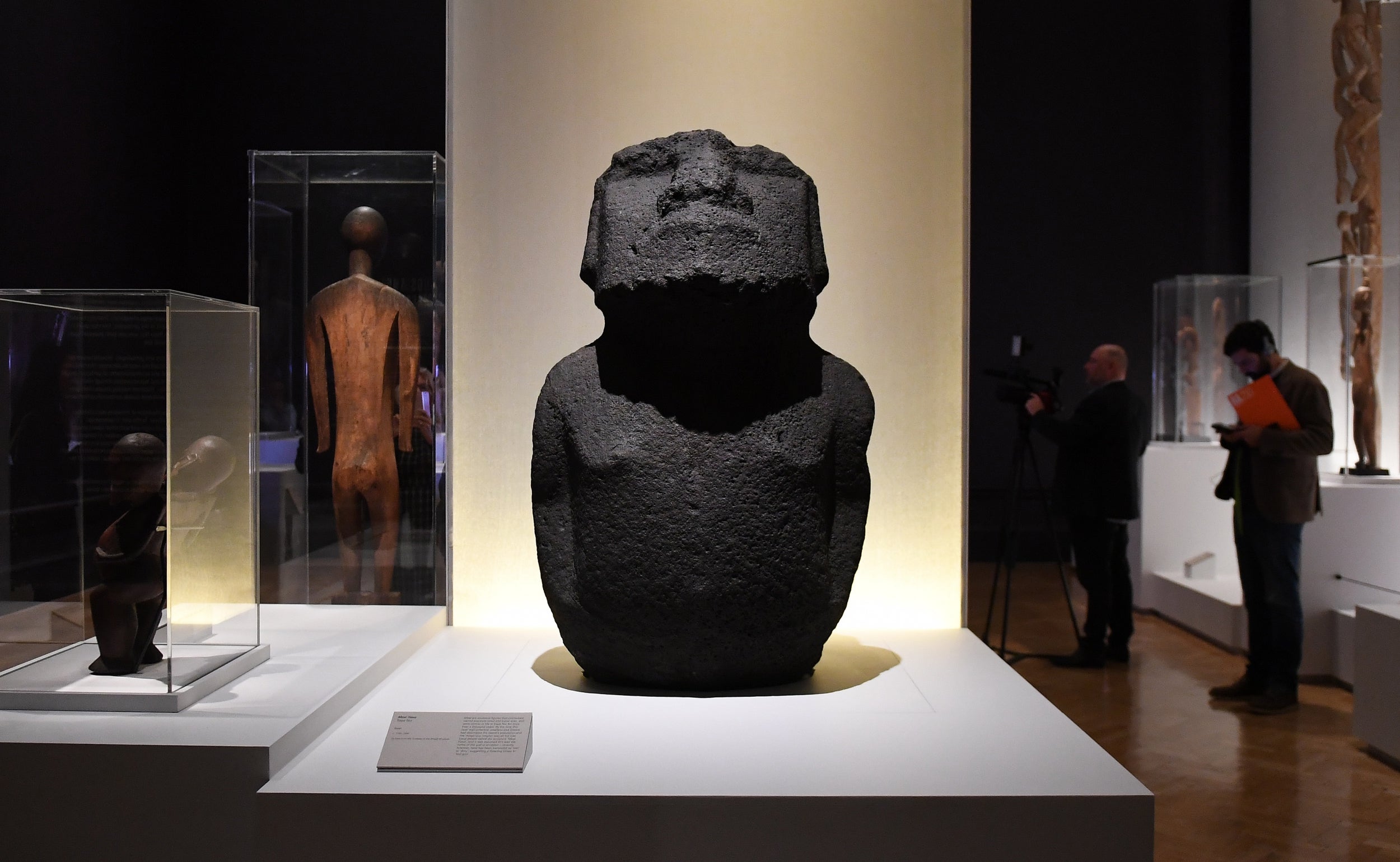 The theme of duality flows throughout the exhibition. As water presents both opportunity and danger to Pacific populations, so too did that of Western conquest. That the West plundered the Pacific and took influence from Pacific artistic and creative endeavours has shaped much of the trajectory of previous re-telling of this area’s history. Yet to view Oceanic art purely through what the West has got out of it would be an injustice. The exhibition arrives in Cook’s anniversary year yet the RA has made significant strides to shed new light and perspectives on how the story is told; with RA Senior Curator Adrian Locke saying that it would not be presented from a European perspective. When James Cook first ventured across the Pacific he encountered a world that was both highly sophisticated and, thanks to ocean-going canoes and navigational aids, interconnected despite the significant distances between islands. The indigenous populations they met came with their own histories of inter-island trade, ocean navigation, and social and artistic traditions. The exhibition presents 250 artefacts that fill the painted, wave-like, blue walled rooms of the RA  and include everything from the practical (canoes, oars), to the symbolic (god figures, feast bowls) and records from the time (drawings and navigational maps) by the Polynesian navigator Tupaia, who travelled on the Endeavour. Tupaia also made faithful drawings of Pacific costumes and ceremonies; exhibited is his watercolour of a Chief Mourner of Tahiti wearing a mask made of two metallic-looking discs that create a lunar abstract effect dates back to 1769.

The exhibition holds a number of artefacts that initially appear strange, yet with a lingering look seem remarkably similar. Viewing Tino Aitu, a male deity, smoothly carved, almost without features, it is hard not to think of Picasso and Modigliani. There is an astonishing resemblance to one of the women in Les Demoiselles d’Avignon,painted by Picasso in his Montmartre studio in 1907. Also on exhibit is an iconic navigational chart from the Marshall Islands. Deceptively simple, this knotted grid of sticks was not intended as a literal map but and highly skilled priest-navigators learned to “read” their way through the constantly shifting landscape of the ocean; fixing a star or constellation as a point of reference in the sky, they were able to carve out pathways to arrive at their destination. Not quite GPS, but not a million miles from how humans all over the globe have been known to plot and record locations. Further highlights of the exhibition include an extraordinary nineteenth-century Ceremonial Feast Bowl depicting the head of a crocodile cheerfully holding a human skull in its teeth. From the Solomon Islands, it has variously been described as being used in both cannibalistic practice and marital ceremonies. Measuring nearly seven metres in length this bowl has never been exhibited before.

The artefacts on show are striking and at times foreboding. Yet it is a couple of the exhibited contemporary pieces that leave a truly long-lasting impression. Fiona Pardington’s Pressure of Sunlight Falling is a masterpiece. When the French explorer Jules Sébastien César Dumont d’Urville made his voyage of the Pacific between 1837 and 1840, he took with him a phrenologist: Pierre-Marie Alexandre Dumoutier. Dumoutier went on to make live head casts of the Noble Savages encountered, out of ethnological interest, and also to judge their character from the bumps on their heads. Oceania gives a place to this as D’Urville mission tends to get overlooked in favour of the early voyages by Captain Cook. Pardington reappropriates these busts from basement collections of busts of the mentally ill and freakishly deformed, and reinvests their mana by highlighting their neoclassical dignity and beauty through immaculate lighting and composition. It is an emotive exploration of the meaning, histories and functions behind the nineteenth century casts and the people who modelled them. 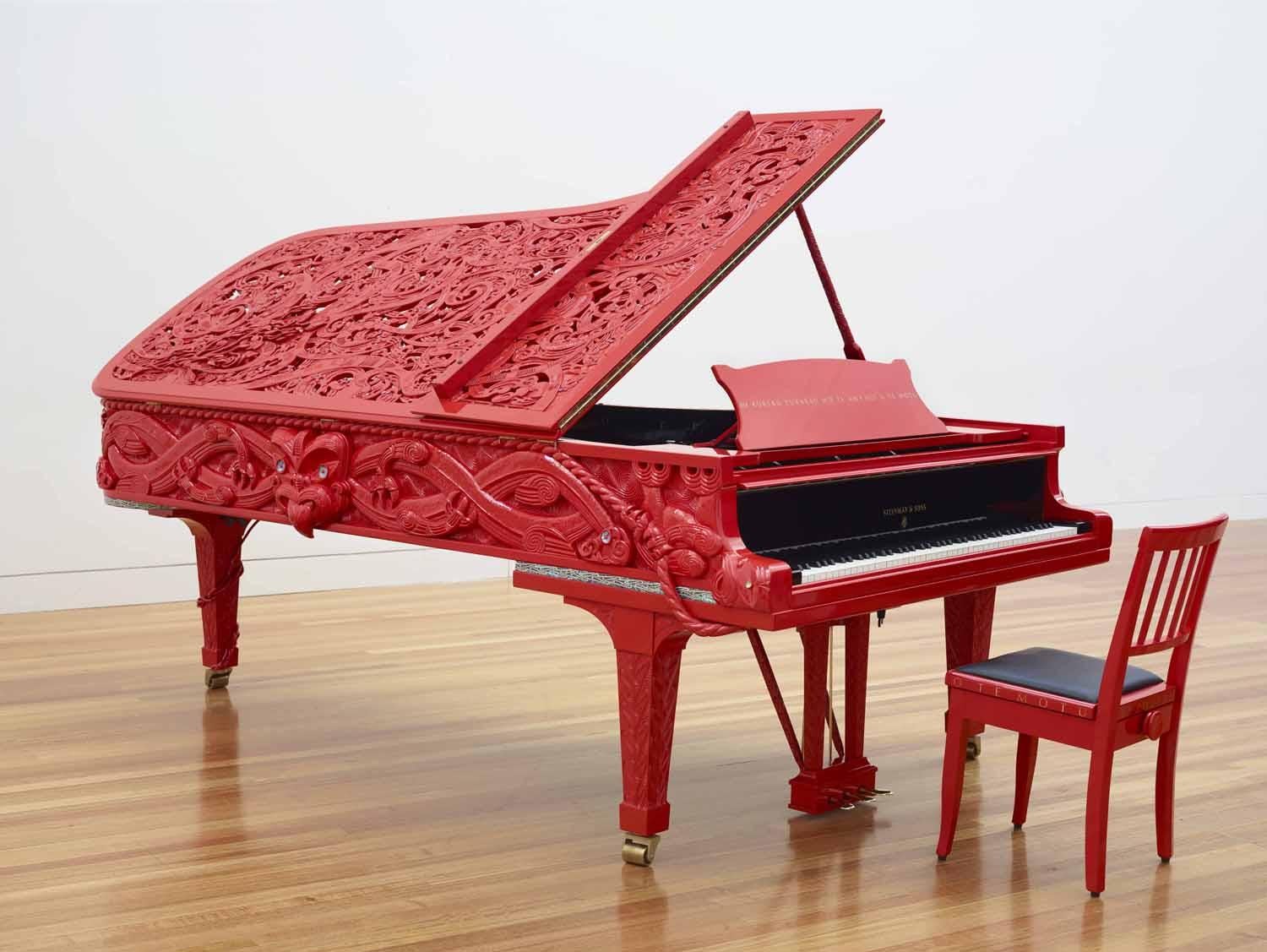 Taking pride of place and undoubtedly the highlight of the exhibition is a work that was one of the stars of this summer’s Venice Biennale. In Pursuit of Venusis a gripping panoramic video work by New Zealand artist Lisa Reihana that charts the arrival of the British and its consequences. Based on the original French woodblock designs for wallpaper dating from the nineteenth century, the projection is 22.5 metres wide, lasts 64 minutes, and has 1,500 digital layers made up of more than three trillion pixels. It depicts the three expeditions made between 1768 and 1779 and would go onto adorn dining and drawing rooms across Europe and North America emanating from these walls the conviction that harmony prevailed among the fortunate Pacific inhabitants. Reihana questions this. Her figures are seen to move, breathe and interact with one another. The scenes are an invention and fabrication and do not shy away from portraying brutal scenes of colonisation and fighting against Euro-centricity. It is a marvellous artwork that brings the past vividly to life and within reach, making the world around the observer seem fluid, surrounded as they are boats plying the waters, and scenes of everyday life taking place. Time, history and even the ground beneath your feet seems to shift.

The exhibition unfolds with so many different narratives masterfully being drawn to make a whole. The exquisite artefacts on show give a context of the strange and the familiar, while the ground-breaking work that contemporary artists such as Fiona Pardington and Lisa Reihana are creating are breathing life into narratives of old. The RA has re-told the story of the Pacific in a revitalising new way, away from Europe and firmly on the soil and in the sea of the Pacific. Oceania is a curatorial feat.

The Oceania Exhibition is running from 29 September — 10 December 2018.  For information on Oceania, visit the Royal Academy.

Want to win £500 and be published in the UK’s oldest literary review? Enter our Short Story Prize! 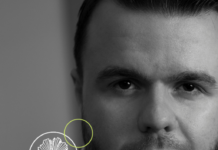 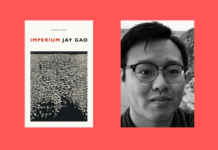 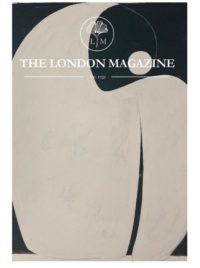