Anglo-Saxon England, which lasted from the 5th to the 11th centuries, a span two-hundred years longer than the Roman occupation, nevertheless occupies a much smaller space in the contemporary historical imagination. The Latin language, Roman political structures, architecture, literature, religion, and iconography are deeply embedded in English culture, while signs of the more recent and longer-lasting period of history are almost invisible, and require seeking out.  If that non-existent creature, the average Englishman, is at all familiar with the Anglo-Saxons, then he probably knows the name ‘Beowulf’ and imagines desperate villagers defending themselves against Viking raids. The British Library’s latest exhibition Anglo-Saxon Kingdoms: Art, Word, War is a corrective to such impressions, providing a comprehensive overview of culture, religion, and politics for amateurs and putting forward a provocative argument to specialists that is surprisingly relevant to Brexit-Britain.

The exhibition is organised chronologically, beginning with the first Anglo-Saxon settlers in the fifth century and ending with the Norman occupation. Within this vast period the curators have focused on several aspects of Anglo-Saxon history and culture including language, literature, religion, science and warfare. To give visitors an extensive understanding of this period the British Library has accumulated a vast range of extraordinary artefacts from collections all over the country as well as from continental Europe. These include: the massive Codex Amiatinus, the oldest complete Latin Bible, produced in Northumbria in the 8th century and returning to England from Italy for the first time in over 1000 years; all four manuscripts which between them contain the corpus of Old English poetry; the Lindisfarne Gospels, which contain the oldest translation of the Bible into English; the Domesday Book;  the Alfred Jewel; and the exquisitely illuminated Book of Durrow from Trinity College Dublin, in England for the first time in over 50 years, along with countless more.

The sheer wealth of the display puts paid to the idea that these were Dark Ages. The intricacy and unity of Anglo-Saxon art is proof of a sophisticated culture traversing political lines: interlocking snake motifs are repeated on micro and macro scales in jewellery, metalwork, and manuscripts; lines from the poem Dream of the Rood preserved in full in the Latin alphabet of the Vercelli Book, are recorded in runes on the 18 foot stone crucifix known as the Ruthwell Cross. The exhibition argues convincingly for a vibrant native culture very different from that of the Roman precursors but by no means isolated from Europe. In fact quite the opposite: Anglo-Saxon England was a nexus for the exchange of ideas between foreign and local agents, plugged firmly into continental political and religious life. This is established in the very first display case, which features a manuscript illuminated by a vibrant image of Germanic pagan god Woden (from whom Wednesday derives) placed next to the St Augustine Gospels, believed to have been brought on his mission to convert the English in AD 597. The worship of Woden long predates the arrival of Christianity in Britain, yet the manuscript exhibited here was produced in the 12th century, hundreds of years later than Augustine’s. This indicates the enduring influence of native culture long after conversion, not as separate from Christianity but rather synthesised with it; the Woden manuscript also contains hagiography. 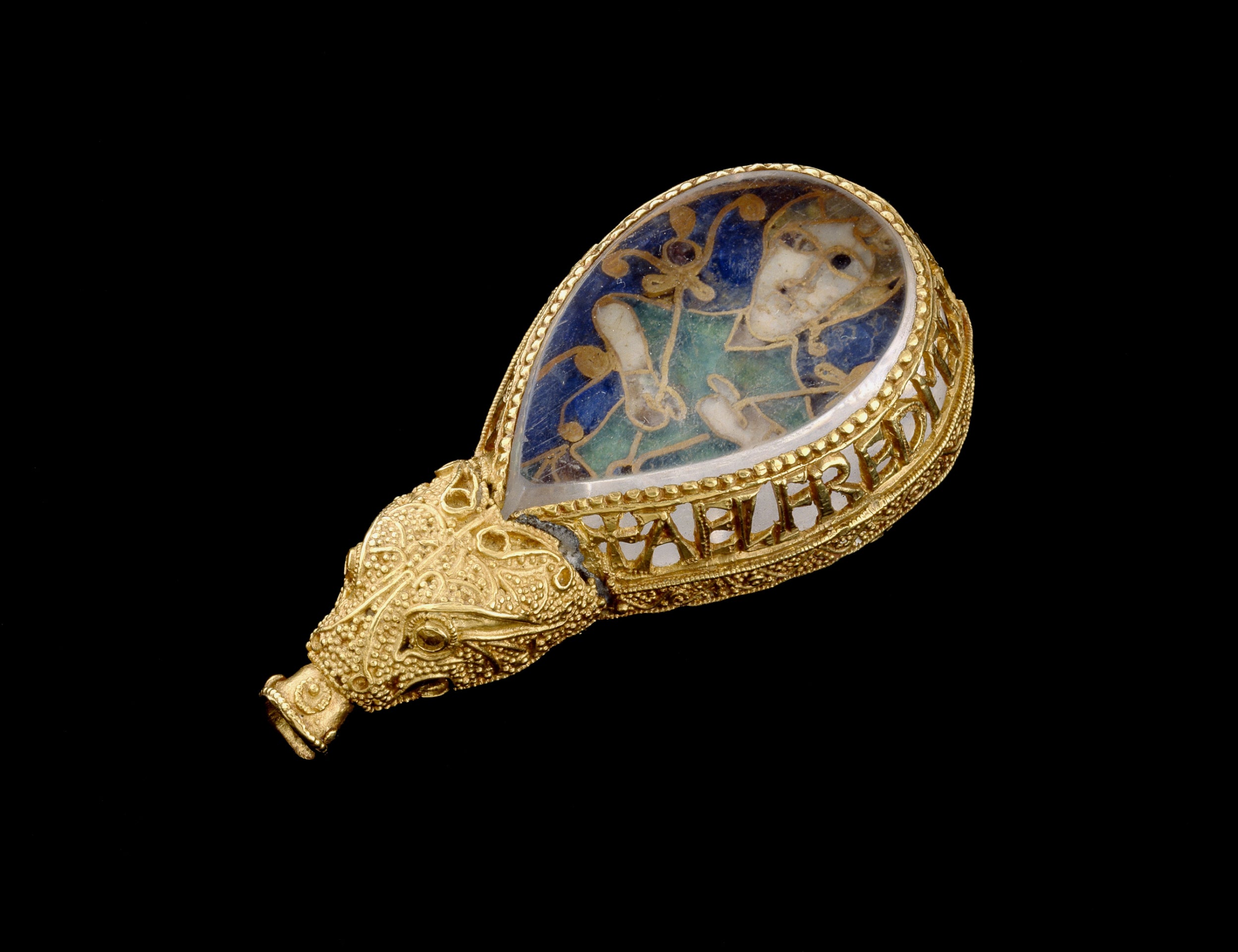 In fusing local and European traditions Anglo-Saxon rulers were able to foster a high degree of cultural exchange. A letter in which Offa, who ruled the Kingdom of Mercia from 757 to 796, persuades Pope Adrian I to create a compliant archdiocese at Lichfield is evidence of British influence abroad, while a gold Abbasid dinar inscribed with Arabic text praising Allah and Muhammed also depicts Offa, demonstrating how receptive Britain was to the winds of trade. It was in this period of cross-cultural currents that the notion of England as a single entity came to be defined. As the West Saxons consolidated their power in the south and west during the 9th century, Viking raiders settled in Northumbria, Mercia and East Anglia; a peace treaty in 880 between Guthrum, leader of the Danes in East Anglia, and Alfred, recognised him as the first King of the Anglo-Saxons. After the death of the Viking ruler in York in 927, Alfred’s grandson Æthelstan claimed control of Northumbria and received the submission of the Scots, Welsh and Strathclyde Britons, making him the first southern ruler to exercise authority over most of the lands now comprising England and south-east Scotland; this led to him becoming hailed as ‘king of the English’.

Both Alfred and Æthelstan sought to raise the status of England within the framework of European culture and learning. Alfred promoted the vernacular as a suitable text for writing, seeking to put it on a par with Latin; he personally translated the texts he deemed ‘most necessary for all men to know’ (several of which are on display here) and oversaw the replacement of Germanic runes by the Latin alphabet in written English. Æthelstan married four of his half-sisters into continental families, and received the sons of the rulers of Brittany, Norway and Francia for fostering at his cosmopolitan court. The exhibits from this period are among the glories of the exhibition. In addition to expected treasures such as the four great manuscripts of Old English poetry, there is a host of scientific literature which illuminates an unexpected aspect of Anglo-Saxon learning. This includes a copy of Isidore of Seville’s De Natura Rerum containing a diagram of the solar system; a manuscript of Bede’s De Temporum Ratione in which he states that ‘the Earth is, in fact, a sphere’, and Bald’s Leechbook a medical text giving the recipe for an eye balm which includes garlic, wine, ox-gall and leeks, and which amazingly was found in 2015 to kill MRSA.

Having studied medieval history in Sixth Form and Old English at university, I was familiar in part with a lot of the areas covered by this exhibition, but these scientific texts were a joyful surprise and emphasised above all just how sophisticated the Anglo-Saxons were. But even without their presence this exhibition would be worth visiting. The coverage of even the most familiar ground is radical and revelatory; the Domesday Book, a product of Norman rule and symbol of foreign imperialism, is argued for instead as an achievement of English administrative prowess, which would have been unimaginable without the bureaucracy established by previous rulers. Anglo-Saxon Kingdoms: Art, Word, War is a once-in-a-lifetime opportunity to see an historic collection of artefacts, as well as a provocative answer to the question ‘what does it mean to be English?’ that turns received notions on their head.

Want to win £500 and be published in the UK’s oldest literary review? Enter our Short Story Prize!