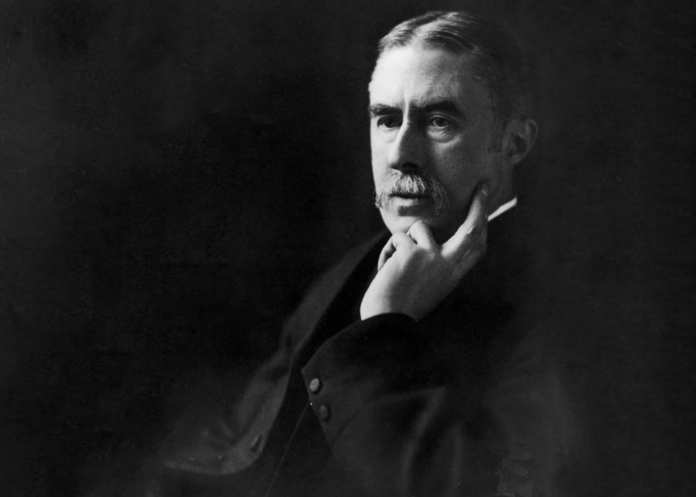 
A. E. Housman was an introverted man whose poetry is somewhat unique in its widespread appeal. Despite only producing two collections of poetry in his lifetime (A Shropshire Lad in 1896 and Last Poems in 1922), his reputation as a master of lyricism and emotive imagery remains undimmed, and the impassioned force of his verse is still just as poignant. The insecurities of Edwardian England and the growing spectre of war made the poems pertinent for an age, and his grasp of the melancholy image of lost youth gave his work more power to an embattled audience.

The great irony that surrounds Housman is the fact that he never visited Shropshire itself, and composed the largest part of his most famous work whilst staying in London. As one of the most eminent of classical scholars to have ever taught in England, he saw poetry not as a central vocation, but as a catharsis. As such an eminent classicist, he was deeply influenced by the lyrical poetry of Lucan, Manilius and Juvenal, of whom he composed detailed and highly regarded criticisms. Often curt by nature, he would command authority in any form of life, and the fact that he excelled at two different careers displays a distinct portrait of a true Renaissance man.

Housman’s aims for the poems was one that he certainly fulfilled: ‘The chief object in publishing my verses was to give pleasure to a few young men here and there.’  He had written poems since his childhood, but he dismissed the idea of taking it up as a vocation. In 1895 he stayed at Byron Cottage in Highgate and created his most renowned work in a short period of creativity. Having been born in Worcestershire, his idea of the ‘land of lost content’ was a work of pure imagination—or at least a vague summation of a sentimental nostalgia for lost youth.

At first, A Shropshire Lad did not perform well, but when the horrors of the Second Boer War reached home, sales picked up, with the themes of bitter-sweet glory and timeless melancholy touching a fervent nerve in the Edwardian classes. “The lads that will die in their glory and never be old” was a line that was to enter into the national psyche when the Great War broke out in 1914.

The imagery in Housman’s poetry is what made him as popular as he became in the first two decades of that century. Whilst the spectre of war clouded over the horizon constantly, the ideas of a Romantic youth, now lost, gave solace to many who were caught in the midst of conflict. In many ways, it shares the themes of Robert Louis Stevenson’s Songs of Travel and Alain-Fournier’s Le Grand Meulnes (the latter author was to die in September 1914). These ideas were later espoused during the Second World War by Evelyn Waugh when writing Brideshead Revisited. Housman reveals them to a vulnerable audience and deeply rooted melancholy that envelopes the verse depicts a certain weakness in the author’s notoriously strong character.

Housman was plagued by many questions about his personality during his lifetime, and they have persisted. Many queried how he could be such an effectively sonorous poet whilst being famously hard to deal with. During his time at Oxford, the last period of youth, he fell in love with Moses John Jackson, who did not return his feelings. This romance was later put into dramatic form by Tom Stoppard’s The Invention of Love and the affair was to apparently have a devastating impact on the young Housman, who initially failed his Finals exams, although this may be simply due to his love of textual criticism over the ancient history and philosophy that together formed part of his course of Greats. His father was at this time deeply ill, and despite his amicable character towards his close friends, this sceptre of trauma may well have had a lasting effect. Many scholars have tried to find instances in Housman’s life that became evident in his later poetry, but there is no reason to conclude that his emotional state was purely portrayed in writing.

Along with Waugh, many other future authors and poets were influenced by the widespread popularity of A Shropshire Lad. George Orwell said that he could probably remember the whole of the collection, and that ‘these were the poems which I and my contemporaries used to recite to ourselves, over and over, in a kind of ecstasy.’ W.H. Auden, who was coming to terms with many of the realities of his young adult identity himself, affirmed that ‘no other poet seemed so perfectly to express the sensibility of a male adolescent.’ Composer and poet Ivor Gurney took the book with him to the War (which he survived, but was afterwards confined to a mental asylum for the last fifteen years of his short life) whilst Siegfried Sassoon did the same, much in the same way in which Wittgenstein took The Brothers Karamazov to the front for consolation. Gurney was one of the many young English composers to set the words to music, many of whom had studied at the Royal College of Music, under Hubert Parry and Charles Villiers Stanford. Vaughan Williams, who employs them in On Wenlock Edge, John Ireland, Lennox Berkeley and George Butterworth (killed in 1916 having shown such bravery to receive the Victoria Cross). Butterworth’s death made his compositions more poignant, and they evoke the deeply reproachful and serene ideas of supposed glory powerfully. The effect is often one that Wilfred Owen was to portray in Dulce Et Decorum Est, a deeply vengeful poem that speaks of the gruesome nature of war, compared to the vainglorious jingoism of the commissars, and ‘the old lie’ told to youngsters ‘ardent for some desperate glory.’ This is present in the music of Gurney, whose mental plight was one of many instances that blighted the lives of that ‘Lost’ generation.

Housman’s poetry is deeply Romantic. He speaks of that most Romantic ideal of the wanderer, who is soul-searching through the countryside, and the eerie obsession with the inevitable confrontation with mortality. This is made even more forceful by Housman’s own atheism, and therefore the lack of what Dostoevsky called ‘a heavenly and eternal reward’ to greet those who passed through the valley of death. The last poem of A Shropshire Lad speaks of a ‘dead man out of mind’, using a phrase from Psalm 31. It was these lines that entered into the souls of so many ‘luckless lads’ who came of age in the War period. For someone who could pour out such tender and emotive verse, it would have come as a bitter surprise to anyone who had not met the man himself to see his often brusque temperament. When E.M. Forster wrote to praise his work, Housman responded with such vile prose that the recipient was ‘so disappointed and hurt that I destroyed it [the letter] after one rapid perusal.’ When teaching, he was known to bring some of his pupils to tears, and one of his victims was Enoch Powell. In public, he seemed to regard poetry with disdain, but whether this was his sincere belief has never been clearly unearthed. His masterful technique and genius for pulling the heart strings of so many mournful adolescents displayed a most genial of spirits, even if there was no hidden lament for the themes he magisterially espoused. T.S. Eliot once said that ‘every poem [is] an epitaph.’ Then let Housman’s be this:

But from my grave across my brow
Plays no wind healing now,
And fire and ice within me fight
Beneath the suffocating night.

Patrick Maxwell is an English writer on politics, literature and music, based near Oxford. He is the editor of Gerrymander, and a writer for many other publications, such as Comment Central and Backbench.