Pearls, on exhibition currently at the Victoria and Albert Museum, elegantly reveals the long historical allure of these precious objects. At once dispelling myths about nature’s formation of pearls and demonstrating the skills – and indeed mortal dangers – involved in diving for and trading them, the exhibition presents the sophisticated taste and craftsmanship that has gone into setting and displaying them through a spectacular array of jewellery and clothing dating back to antiquity. Implicitly, the exhibition imparts a lesson in human vanity: appreciated for their rarity and beauty, the value of pearls has been connected with symbolic and religious power but it has also been inextricably bound with extremes of worldly power and wealth.

Indeed, the pearl has arrived at the V&A accompanied by the latter, since the partner for this exhibition is the Qatar Museums Authority (QMA). The QMA’s head, Sheikha Mayassa bint Hamad bin Khalifa Al Thani – the thirty year-old daughter of the Emir of Qatar – has been referred to in the press as the most powerful woman in the art world who controls an enormous budget for investment in art. Although it is not made officially public, the British media has speculated on her annual budget, and this exhibition underscores the grounds of those speculations with some extraordinary items.

From antiquity to the mid-twentieth century, the Arabian Gulf was one of the main sources of pearls with Qatar and Bahrain at the centre of the pearl-diving industry. From there, pearls were traded and sent to Europe and Asia via the Indian Ocean. Pearls have also been found in many other areas, including the Philippines and Burma, the Caribbean and Solomon Islands, Mexico and Peru, North America and New Zealand. But it was only with the emergence of cultured pearls in Japan in the early twentieth century and the spread of modern pearl culture techniques that the precious jewel became affordable to many more consumers, modernising its appeal. By the mid-twentieth century, the pearl-diving trade in the Arabian Gulf had ground to a halt and many natural pearl sources around the world had begun to dry up.

Nevertheless, the decline of pearl diving coincided with the discovery of oil in the Gulf. This has made Qatar one of the richest nations in the world, boasting the third-highest GDP. The QMA holds the world’s largest collection of natural pearls as well as some very valuable pieces of natural pearl jewellery. Qatar’s recent investments in art are turning the small nation into a regional cultural centre, though some of its purchases have caused controversy and have been seen as inflating the art market. Last year, the QMA notoriously paid $250 million for Cézanne’s Card Players, the highest sum ever paid for an artwork. Another recent purchase is the 1930s Cartier five-strand natural pearl necklace with diamond and platinum clusters, bought from Sotheby’s for over £2 million and displayed amid the panoply of other treasures at the current exhibition.

Qatar’s investment drive, which includes education and culture more generally, is explicitly justified as a way of preparing for a post-oil economy. But it may also be seen as part of a wider nation-building project, legitimizing the young gulf nation, which remains an absolute – if enlightened – monarchy during a period of instability and revolutionary upheaval in the Middle East.

Beatriz Chadour-Sampson, curator of the exhibition, understandably avoids discussing the wider political and economic issues, and declined to comment on the effect that such a large budget may be having on the art market and indeed on museums such as the V&A. Her focus is the exhibition itself, and rightly so, since it commands attention on its own terms, whatever the socio-economic context of the international art market and its wealthiest investors.

Pearls happily adheres to classical aesthetic principles by being both pleasurable and instructive. Based on the 2010 and 2012 exhibitions in Doha and Kobe respectively, which focused on the natural history and scientific formation of pearls,Pearls has received the best of V&A treatment by taking a different path. It journeys though the history of pearls, allowing audiences to gawp in wonderment at their sensual beauty in fashion, state costume and jewellery since Roman times, through the Byzantine era, the Middle Ages, Renaissance and beyond, right up to contemporary times, both in Europe and further afield.

The exhibition begins with a short but fascinating lesson in the formation of pearls, dispelling the popular myth that pearls are formed around a grain of sand. It shows instead that pearls are created when a parasite intrudes into almost any sort of shell or mollusc. The parasites are usually tapeworm larvae that inhabit and are excreted by sharks, pikes and other fish. When they enter a mollusc, they disrupt the cell growth between the shell and its lining, or mantle. Nacre cells grow around the parasitical worm, often encasing it until it dies and disintegrates, forming a pearl.

After the science, another short section on pearl diving reveals the simple techniques that were used, unchanged, for centuries. A video made during the 1970s by Qatari television shows one of the last pearl diving expeditions along the Qatari coast. The exhibition then takes the visitor on the historical journey through fashions in jewellery and clothing. Portraits of queens, duchesses and aristocratic ladies decked in pearls are included, as are drawings of jewellery designs and pearl-encrusted clothing. The majority of the exhibition, though, consists of pearl jewellery and accessories, ingeniously displayed in solid but attractive nineteenth-century metal safes. Chadour-Sampson explained that these safes belong to a designer who lent his collection to the V&A when the insurance company demanded secure displays for the treasures.

The jewellery is certainly fabulous and begins with fine examples from the Roman and Byzantine empires. In medieval Europe, the pearl was associated with power and authority and was used in coronation regalia and church silver. It was also associated with Christ and the Virgin Mary and symbolized purity and chastity. On display is a rarely seen medieval jewelled girdle with animal motifs lent by New College, Oxford. The pearl has often symbolized sensual beauty, purity and fertility, and has been associated since ancient Greece with the goddess Aphrodite, who was born from the foam of the sea.

Rather poignant is Charles I’s pearl drop earring. An authenticating letter written by his grand daughter Mary II tells us that this was removed from his ear after his head was severed at the executioner’s block in 1649.

During the Renaissance more widely, the irregular shapes of ‘baroque’ pearls encouraged goldsmiths to create fantastical pendants and bodice ornaments, turning the pearls into parts of animals, ships and human bodies. Hence we see an Italian pendant with a lion standing on a snake, and a lively carnival dancer, whose body is a large baroque pearl.

The eighteenth and nineteenth centuries, meanwhile, saw pearls used in ‘sentimental’ jewellery, with pieces representing love or mourning. Victorian items include pearl-encrusted watches and brooches carrying intimate messages, and naturalistic designs depicting vines, fruits and flowers. Remarkable pearl and diamond objects include the Dagmar necklace that belonged to the fashionable Princess Alexandra of Denmark who eventually married British King Edward VII, and the large moth and spider brooches that belonged to Empress Eugénie of France, who also inspired the fashion among European aristocracy for wearing multiple long strings of pearls. Historical events often play a key role. The emergence of new bourgeoisies created increased demand for pearls and diamonds, and European revolutions led to the sale of toppled monarchs’ collections. After the collapse of Napoleon III’s empire, for instance, the French government sold the Crown Jewels in 1887. These were bought by Parisian jewellery houses and Tiffany in New York, and sold on to aristocratic ladies or to new industrial and financial elites.

As we move into the twentieth century, art nouveau pieces include extraordinarily shaped baroque pearls set into pendants, as well as long necklaces like the 1925 Cartier sautoir. A section on ‘authority and celebrity’ shows pearls intricately sewn into the clothing of Indian nawabs or decorating Russian icons, while later on pearls are prominently placed in the tiaras of European aristocracy or symbolically decorate a ball gown worn by Queen Elizabeth II on a state visit to France. The visitor can also delight in the large natural pearl drop earrings designed by Bulgari that belonged to Elizabeth Taylor, or the simple string choker of cultured pearls bought for Marilyn Monroe by her husband Joe DiMaggio, which she wore on the day of their divorce.

The final section is dedicated to the cultured pearl, pioneered by Kokichi Mikimoto in Japan in the late nineteenth century. An illuminating two-minute video demonstrates Mikimoto’s grafting techniques and there are some impressive exhibits of early and contemporary Mikimoto pearl pieces. Also on display are pieces of jewellery made from cultured South Sea pearls, found in a surprisingly vast array of colours that reflect the colour of the shells in which they are found; these are loaned by jewellery designer Yoko, and followed by some highly original pieces by contemporary designers.

The exhibition ends by questioning about the future of cultured pearls, with a display of buckets filled with mass-produced Chinese pearls. While China does produce some high quality salt-water pearls the vast majority are of mediocre quality. Since mussels are resistant to pollution and as many as fifty grafts from a donor mussel can be inserted into each one, freshwater mussel farms can be created in any watery area, including flooded rice fields and near housing estates.

What is missing in Pearls is some sort of comparison with other jewels, such as diamonds, emeralds and rubies. I found myself asking whether this kind of treatment of pearls through the ages could be applied to any gemstone. A detailed comparison would undoubtedly require another exhibition, but a general statement of what Chadour-Sampson told me independently would have been useful: while the value of and fashion for diamonds, emeralds and rubies throughout history has depended on when and where sources have been found, pearls are a ‘global phenomenon’ which have been continuously in fashion because they have always been found – and found throughout the world.

The book that accompanies the exhibition provides far more information than the exhibition itself. It is more than a simple exhibition catalogue and begins to answer some of the questions about the cultural history of pearls that the exhibition leaves open. Nevertheless the exhibition stands admirably on its own and the V&A has brought its expertise in the history of jewellery, fashion and design to this particular subject. With two hundred objects from forty different lending sources, both institutions and private collectors, it has added breadth as well as symbolic and historical perspective to the original Qatari exhibition. 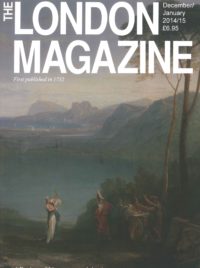 The Creative Moment Part One

A Hologram of the Holy: Bridging the Cultural Divide

Mortality and Dream … and a Love of Good Books

The Allure of the Pearl

Music for the Newer Rite

The Ironical Gaiety of Isaiah Berlin

The Rage of Modernism: Self in the Vortex

One Shrug in Particular