Daisy Dunn formerly lived in Wimbledon. This is the 15th article in our regular series “My London”.

Wimbledon was the first place I knew. My parents lived in Bertram Cottag­es, a pretty Victorian terrace just off the Broadway, in the ‘Ministers’ quar­ter of town. From my birth in Westminster to my first years here, in a house circumscribed by Gladstone Road, Palmerston, Herbert and Montagu(e) roads, I could not have been more on course for the top job.

George Hamilton-Gordon, Prime Minister from 1852-1855, lived for a time at Cannizaro House, up from the Ministers, close to the Common. ‘The travell’d thane, Athenian Aberdeen’, as his cousin Lord Byron called him, had much at his fingertips at Cannizaro, not least the gardens (land­scaped by his guardian Henry Dundas) and the extravagant fireplaces (for­merly enjoyed by his other guardian, William Pitt the Younger).

I admired the same treasures, tumbling each Sunday across the Common into Cannizaro’s forecourt, where an aviary of budgerigars stilled me. If it is the bigger birds which cause the greater vibrations upon the perch, then why do they concede to the smaller, friskier ones? Should a bird escape the aviary for the House, who should heed the portent, now the house is a hotel?

The day the park warden inserted a sheet of glass between the cage and the aviary frame, I knew that my early start on the premiership was over. The world suddenly seemed a lot more sanitary outside the aviary than inside it. So that was that. The glass muffled the birdsong, but did nothing to blur the spectacle. This was Wimbledon, after all, where spectators flourish in the knowledge that, when glass breaks, bird shit falls through the window.

The championship tennis courts sit down the hill in Southfields, two tube stops from Wimbledon proper. Spectators will watch David Cameron and the Duke of Cambridge and whoever else happens to be in the royal box only until the game starts. All eyes are then on the court. The focus of the crowd is part of the game – or so we like to imagine. The point is that, from the sidelines, the whole thing looks entirely manageable. Take to the court yourself, of course, and the reality is different. My experience to date has been akin to that of Jeremy Garnet, the visitor thrashed by Mr Chase in P. G. Wodehouse’s Love Among the Chickens:

His service was bottled lightning. His returns behaved like jumping crackers. He won the first game in precisely six strokes. He served. Only once did I take the service with the full face of the racquet, and then I seemed to be stopping a bullet. I returned it into the net. The last of the series struck the wooden edge of my racquet, and soared over the back net into the shrubbery, after the manner of a snick to long slip off a fast bowler.

The difficulty, perhaps, is that I persist in playing with a wooden racket.

Tennis fortnight is when Wimbledon is most alive, thrilling with Pimm’s on rooftop bars, reinvigorated hanging baskets, and roars which lose their offensiveness by the time they reach the hilltop at St Mary’s. The Championships mark the beginning of summer, regardless of where you live. The only way to appreciate the length of the holidays is to think back to the Wimbledon finals as soon as autumn beckons.

The spire of St Mary’s was restored last autumn after suffering damage by woodpeckers. The process required so many scaffolds to be layered across it that it resembled a Japanese pagoda. Those fortunate enough to scale it would have appreciated how many of the nearby houses possess turrets or domed roofs. Arthur Road, immediately beneath the church, is home to a round house that was a well, its roof a moon-like dome; the mansion opposite has a turret to match.

In front of the church is the nineteenth-century Stag Lodge, once part of the estate occupied by Wimbledon Manor House. The Manor is long gone, demolished in 1949 after a tumultuous history of destruction by fire and rebuilding. The stag, however, remains. It has become as famous a talisman for Wimbledon as the cockerel is for Dorking.

Since 2012, another stag, three-metres tall, steel, brown, has stood outside Wimbledon Station. It is practically flat, like a cut-out or a Christmas tree decoration. It is no match for the more muscular stag of Stag Lodge. Then again, it offers a promise: a brisk, eight-minute walk uphill from the station will take you to Wimbledon Village, home to the Stables. Here lies the path to acquiring legs like a vixen.

Wimbledon Village is my favourite part of London. It may look chichi with its boutiques and overpriced green-grocers, its artisan delicatessens and pomegranate molasses, but it remains, against all odds, unpretentious. The march of the coffee chain has not quite been quelled, but independents dominate: independent bookshops, cook-shops, shoe-shops, cafés. A row of antique specialists (no shame in repros). Cafés. Horses. Horses trotting by diners. Diners on pavements free from rope barriers. Picnic benches and children on reins. Cocktails named ‘Squirrel’. Buckets of flowers. Chalkboards.

Nowhere else feels at once bustling and spacious like Wimbledon Village. The secret is that the High Street widens at both ends. The end one en­counters first after approaching from the town feeds into the Ridgeway, a residential street of large houses. At the far end of the High Street, the road forks. One of those forks then splits again, offering a view onto the Com­mon beyond. Like the most successful landscape gardens, it is impossible to see from one end of the Village to the other. The scenery builds with every step you take. In its twists and turns it is harmonious, constantly surprising:

From harmony, from heavenly harmony,

Like the prime ministers, the poets – and Admiral Lord Nelson – occu­py distinct patches of Wimbledon. Nelson Road, Trafalgar Road, Victory Road, Hardy Road, Hamilton Road: a paean to British fortitude in South Wimbledon. Dryden Road, Tennyson Road, Milton Road, Cowper Road, a cerebral circle on the other side of town. Did any of them live here? Not as far as I know, though Nelson lived in nearby Merton. Wimbledon might have been too throbbing for Lord Tennyson, too far from paradise for Milton, too secular for Cowper. But Dryden, I think, would have liked it. He had classical sensibilities, like I do. Wimbledon may be more renowned for its Victorian and Edwardian mansions than for its Neoclassicism, but the marriage between old and new that characterises Wimbledon’s archi­tecture evokes the spirit of the Roman lyricists. I imagine Catullus and Dryden strolling here, comparing the blending of literary tradition and in­novation with the splicing of Victoriana with urban chic and Wombles. A ludicrous image.

But a necessary one. Wimbledon may be my London, but I lament more and more that it is not mine. Our relationship today is more bittersweet than it was in my childhood of Cannizaro Sundays. I can neither afford it nor escape it, so I must smile at it. This year will draw me back to it more often than last. An old school friend is moving to a house just along from Bertram Cottages: my first home as a baby; her first home with her boy­friend. Wimbledon is a foundation. It may take you backwards or it may take you forwards.

Daisy Dunn is a writer and doctor of Classics and Art History. Her first book, Catullus’ Bedspread, was published by William Collins in January.

Art in the Kitchen Sink

The Potency of Myth

Real Texts versus the Duller Page 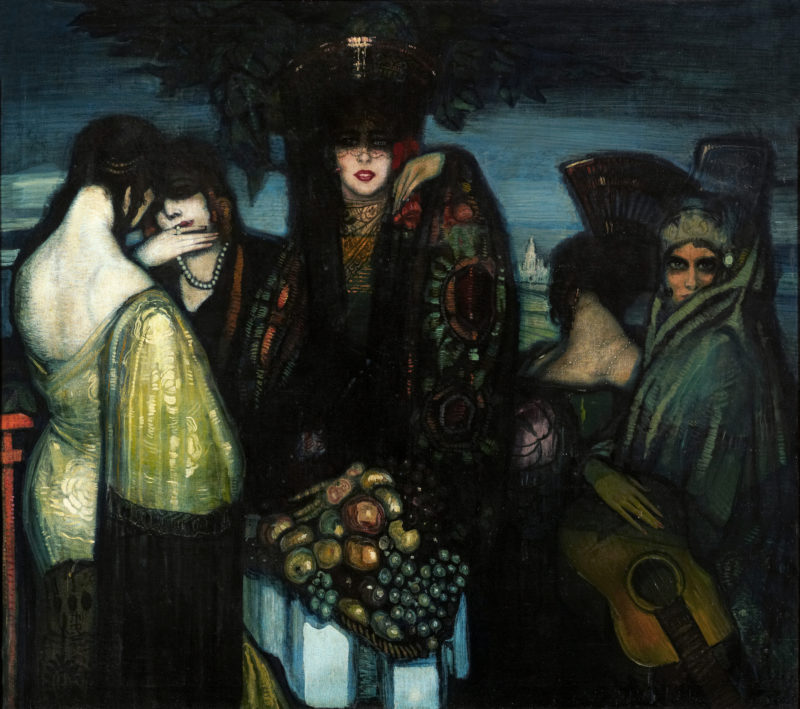 Twilight of the Idols

A Different Sort of Provocation

The Origins of Tom & Jerry

Royalty and Honour at War and Peace

In the Corridor & other poems

Response to Finding a Fossil at Writhlington Coal Batches